The 1st of March is known as the day of Baba Marta and people exchange Martenitsa. It is unique Bulgarian Holiday. On the day of Baba (Grandmother) Marta, people are giving each other Martenitsi with a wish for health, happiness, luck.

Martenitsa is a red and white talisman – symbol of health and fertility. 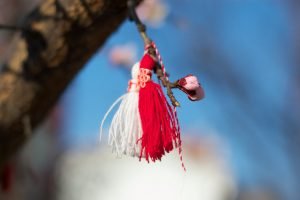 Tradition dictates that Martenitsi are always given as gifts to family and friends. Typically Martenitsa is handmade and it is like a ritual. While making it you need to wish good things for the ones you are making it and to have only positive and happy thoughts. When somebody receives Martenitsa, he/she needs to wear it until seeing a stork or blossoming tree. The the Martenitsa should be put on a blossoming tree for fertility.

The roots of the holiday date back to the pagan times. The red color symbolizes the feminine beginning, health, conception and birth, and the white color – the male beginning, strength and light. By this invariable combination between the man and woman, which actually rules the world, the Bulgarian folklore notifies the beginning of the spring season and the new beginning.

The Martenitsa is also a stylized symbol of Mother Nature. The white is a symbol of purity of the melting white snow. The red  symbolizes the setting of the sun, which becomes more and more intense as spring progresses. These two natural resources are the source of life. They are also associated with the male and female beginnings, and in their balance, with the need for balance in life.

Most of the legends for the origin of the matrenitsa are related to the foundation of Bulgaria and the pre-Bulgarians. One of them says that after a vicious battle, when the khan himself found his death, the Bulgarians managed to win and sent a pigeon to their relatives with white cotton weaved on it – as a sign of victory. Hostile arrow, however hit the pigeon and his blood coloured the cotton, until he reached the village. The priest interpreted this, as a sign of victory, gained with a lot of blood. 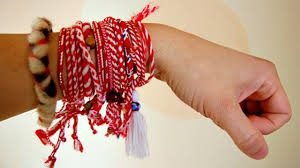 The other legend tells that after the victory of khan Asparuh over the Byzantines, he had to thank god Tangra. According to the tradition the sacrifice pyre had to be lightened by a spray of fennel, which did not grow up along our lands. The khan was desperate and at that moment a small swallow, sent by his sister. It carried a spray of the herb, tied by red and white cotton for health and luck. Probably, that is why today the greeting cards for 1st March have a swallow drawn. 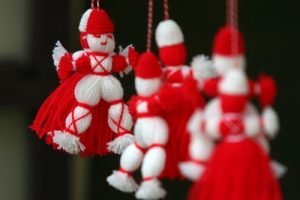 Baba Marta is an elderly lady with extremely changeable character. She has a power over the weather and according to her mood it is sunny or cloudy with snow and rain storms. In Bulgarian folklore Baba Marta is a grumpy old woman who changes her mood very rapidly and it reflects in the changeable March weather. When she is smiling the weather is sunny and warm, but if she gets angry the cold will stay for longer and it may even snow. By wearing the red and white colors of the Martenitsa our predecessors hoped that it will make winter pass faster and bring spring.

The most typical Martenitsa represents two small wool dolls – Pizho and Penda. Pizho is the male doll and Penda is the female doll. There are many other variations and forms of these talismans – bracelets, necklaces, tassels, pompons, balls, squares, human or animal figures.

Nowadays making Martenitsa is a real art and there are many different types:

Wish your family and friends health, happiness and luck by giving as a present traditional Bulgarian Souvenir – Martenitsa.