It is the Pumpkin Season. Enjoy some of the recipes with pumpkin that Bulgarians like to cook. They are mostly sweet dishes.

Have a look at the sweet recipes for Pumpkin Banitsa (Tikvenik), Baked Pumpkin, Baked pumpkin with milk, Pumpkin with walnuts: 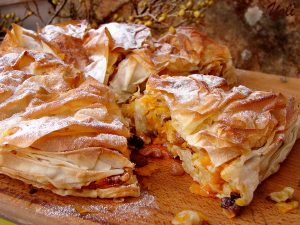 1. Stew the pumpkin in some water and the half of the butter.

2. Mix together all the ingredients for the dough and knead a semi-soft dough.

4. Roll out each ball to a thin sheet.

5. Put the filling ingredients (pumpkin, sugar, walnuts, and cinnamon) on top of each sheet lengthwise.

7. Arrange the rolls in a baking dish. Shape them as one big coil starting from the middle of the dish and going toward the edge.

8. Pour the remaining butter on top.

9. Bake for about 30 minutes or until golden brown at 390°F. Serve warm, sprinkled with powdered sugar

Hint: You can also use filo dough sheets instead of rolling your own. 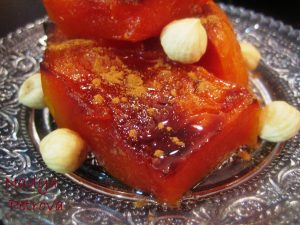 2. Stuff the pumpkin with the dried fruits, walnuts, honey, and cinnamon.

3. Cover the pumpkin with the top part that you cut off in step 1.

5. Take the stuffing out of the pumpkin. Be careful as it is probably hot.

6. Cut the pumpkin in pieces. Serve the pieces topped with the stuffing. 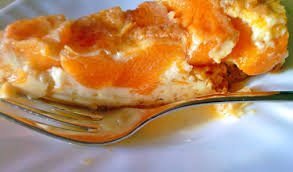 1. Cut the pumpkin in pieces. Clean the seeds and fiber from each piece.

6. Bake again until a golden crust forms on top. 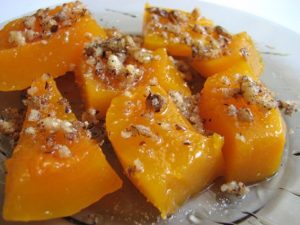 1. Clean the pumpkin and cut it in pieces.

2. Put a porcelain plate on the bottom of a pot, arrange the pumpkin pieces with the crust up, pour in a cup of water,  over and stew them for about 10 minutes.

3. When the pumpkin is cooked, remove the crust and mash the rest (the meaty part).

4. Whisk the eggs with the sugar and add the walnuts.

5. Butter a baking dish and pour in the mixture.

Have a sweet pumpkin season! 🙂

Epilepsy Safe Mode
Dampens color and removes blinks
This mode enables people with epilepsy to use the website safely by eliminating the risk of seizures that result from flashing or blinking animations and risky color combinations.
Visually Impaired Mode
Improves website's visuals
This mode adjusts the website for the convenience of users with visual impairments such as Degrading Eyesight, Tunnel Vision, Cataract, Glaucoma, and others.
Cognitive Disability Mode
Helps to focus on specific content
This mode provides different assistive options to help users with cognitive impairments such as Dyslexia, Autism, CVA, and others, to focus on the essential elements of the website more easily.
ADHD Friendly Mode
Reduces distractions and improve focus
This mode helps users with ADHD and Neurodevelopmental disorders to read, browse, and focus on the main website elements more easily while significantly reducing distractions.
Blindness Mode
Allows using the site with your screen-reader
This mode configures the website to be compatible with screen-readers such as JAWS, NVDA, VoiceOver, and TalkBack. A screen-reader is software for blind users that is installed on a computer and smartphone, and websites must be compatible with it.

We firmly believe that the internet should be available and accessible to anyone, and are committed to providing a website that is accessible to the widest possible audience, regardless of circumstance and ability.

To fulfill this, we aim to adhere as strictly as possible to the World Wide Web Consortium’s (W3C) Web Content Accessibility Guidelines 2.1 (WCAG 2.1) at the AA level. These guidelines explain how to make web content accessible to people with a wide array of disabilities. Complying with those guidelines helps us ensure that the website is accessible to all people: blind people, people with motor impairments, visual impairment, cognitive disabilities, and more.

This website utilizes various technologies that are meant to make it as accessible as possible at all times. We utilize an accessibility interface that allows persons with specific disabilities to adjust the website’s UI (user interface) and design it to their personal needs.

Additionally, the website utilizes an AI-based application that runs in the background and optimizes its accessibility level constantly. This application remediates the website’s HTML, adapts Its functionality and behavior for screen-readers used by the blind users, and for keyboard functions used by individuals with motor impairments.

If you’ve found a malfunction or have ideas for improvement, we’ll be happy to hear from you. You can reach out to the website’s operators by using the following email

Our website implements the ARIA attributes (Accessible Rich Internet Applications) technique, alongside various different behavioral changes, to ensure blind users visiting with screen-readers are able to read, comprehend, and enjoy the website’s functions. As soon as a user with a screen-reader enters your site, they immediately receive a prompt to enter the Screen-Reader Profile so they can browse and operate your site effectively. Here’s how our website covers some of the most important screen-reader requirements, alongside console screenshots of code examples:

We aim to support the widest array of browsers and assistive technologies as possible, so our users can choose the best fitting tools for them, with as few limitations as possible. Therefore, we have worked very hard to be able to support all major systems that comprise over 95% of the user market share including Google Chrome, Mozilla Firefox, Apple Safari, Opera and Microsoft Edge, JAWS and NVDA (screen readers), both for Windows and for MAC users.

Despite our very best efforts to allow anybody to adjust the website to their needs, there may still be pages or sections that are not fully accessible, are in the process of becoming accessible, or are lacking an adequate technological solution to make them accessible. Still, we are continually improving our accessibility, adding, updating and improving its options and features, and developing and adopting new technologies. All this is meant to reach the optimal level of accessibility, following technological advancements. For any assistance, please reach out to